“There is no color in my work, and what you see is just a prismatic effect, so everything is just an illusion.” 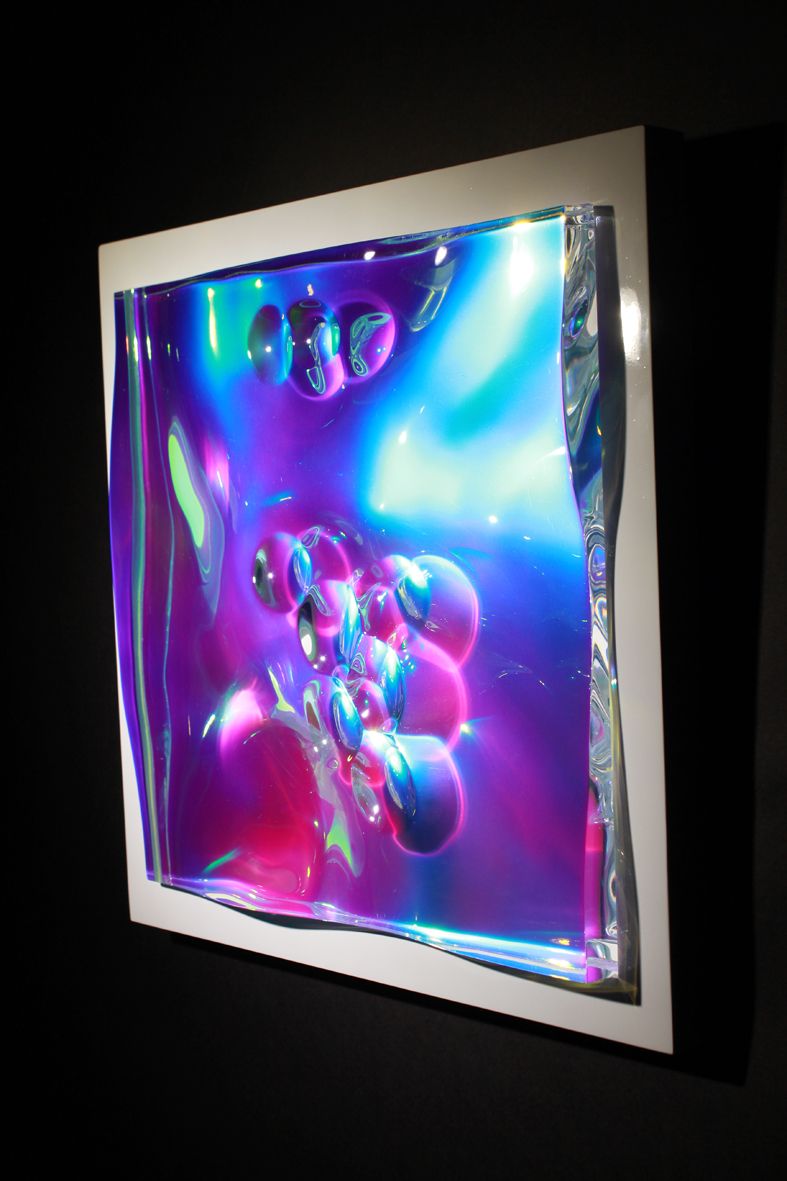 Go Ogawa joined the Japanese art collective C-DEPOT in 2011. He is known for creating three-dimensional installations using holographic plastic films of images of the galaxy taken by the Hubble Space Telescope.

In this interview, I talked to him about the origins of his art, what his work means to him, and his continued experimentation with the medium of color. This interview has been lightly edited for length and clarity.

Breaking Away from the Rules of Traditional Sculpture

“My statue would not have been accepted by the university if I had simply broken the rules.”

How did you grow to become the artist you are today?

When I entered Tokyo University of the Arts, I didn’t have any ideas related to my current work. My sister was studying art at another university, and I wanted to be an artist too. I knew that sculpting the human form was what I needed to do to become an artist, so I put a lot of effort into it.

However, I soon realized that I did not want to be bound by the traditional rules of sculpture. For example, when I made a sculpture of a woman, the statue had to be freestanding, but I challenged that and sculpted her leaning against a wall. This “standing” was uncomfortable for me, as breaking the rules was not enough to be accepted by the university. Since then, I have been striving to be free to create what I want to create.

Which artists have influenced you?

I didn’t have a favorite artist when I was a student, but now I am particularly fond of Olafur Eliasson, ever since I was impressed by his solo exhibition at the Hara Museum in Tokyo. He is a very clever artist who studies the structure and origins of nature and then reconstructs that structure in his work. I feel that his approach is somewhat similar to my own. I have been greatly influenced by him.

I have also been influenced by Jeppe Hein, who has created works such as Waterflame, a fountain with an ever-burning flame spouting at its apex, and 360° Presence, an installation in which large metal spheres are rolled around in a white cubic art space to destroy the walls. I am greatly influenced by this kind of work. We are not so much influenced by each other in the form of expression, but we share the same goal of moving the viewer’s mind and attracting attention with our work.

If I had to name one Japanese artist who has influenced me, I would say that I feel that Tokujin Yoshioka’s work is a good example. I especially identify with Tokujin Yoshioka’s attitude of delving deeply into the trivial thoughts and inspirations that occur in our daily lives and turning them into artworks.

“… The underlying theme is ‘illusion and reality’.” 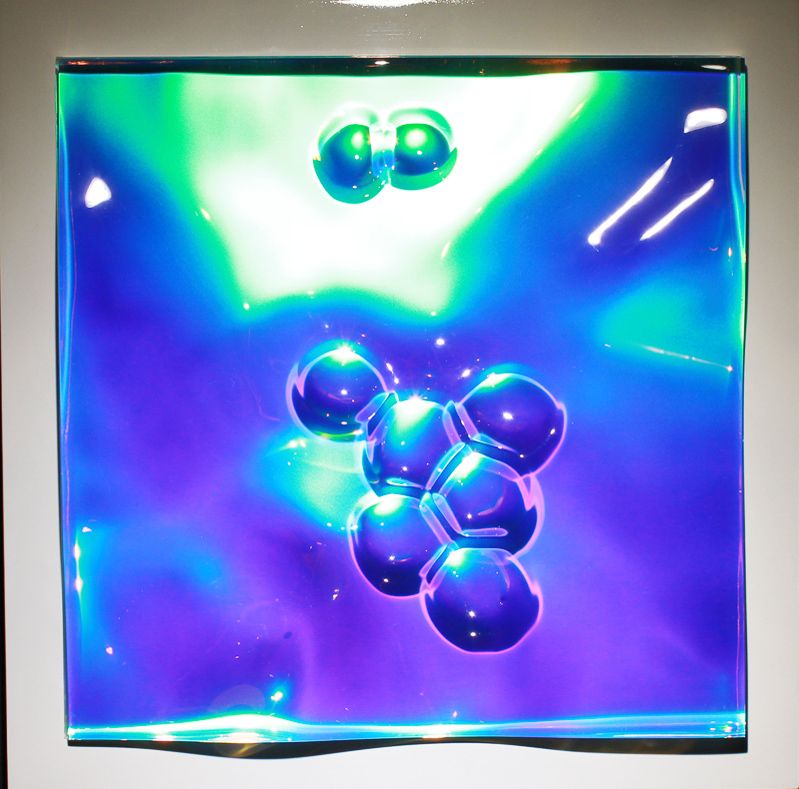 What is the theme you want to express through your work?

“I felt that the idea of shapes that exist but are difficult to recognize was a great fit for my work.”

Can you tell us how you developed your current holographic film art style?

I love looking at pictures taken by the Hubble Space Telescope, and I was looking for a way to express the universe in a new approach different from the planetarium. In the process, I kept searching for the right material, and around the time I graduated from graduate school, I found a special film. From then on, I experimented with how to use the film in my works. The film is like a thin sticker, so it can only be applied to the surface of transparent acrylic resin.

Then I started designing the surface. In the first stage, I used a glass sphere as a base to apply the film, and after a lot of trial and error, I arrived at the current style.

How did you choose this combination of transparent material and hologram film?

I noticed this when I was studying sculpture at university. A sculptor always cares deeply about the details of a statue, but if the surface is transparent, the details are not visible. The contradiction of a transparent statue with high detail was one of the themes I was studying in graduate school. I felt that the idea of a form that exists but is difficult to notice was very suitable for my work.

Also, my works look like they are colored, but in reality they are not. The color you see in my work is just the refraction of the acrylic base and the reflection of light created by the light reflecting at a certain angle. The intricate details on the surface are transparent, so it is hard to see the shapes clearly, but there is no color in my work. There is no color in my work, it is all just an illusion because it is only a prismatic effect. 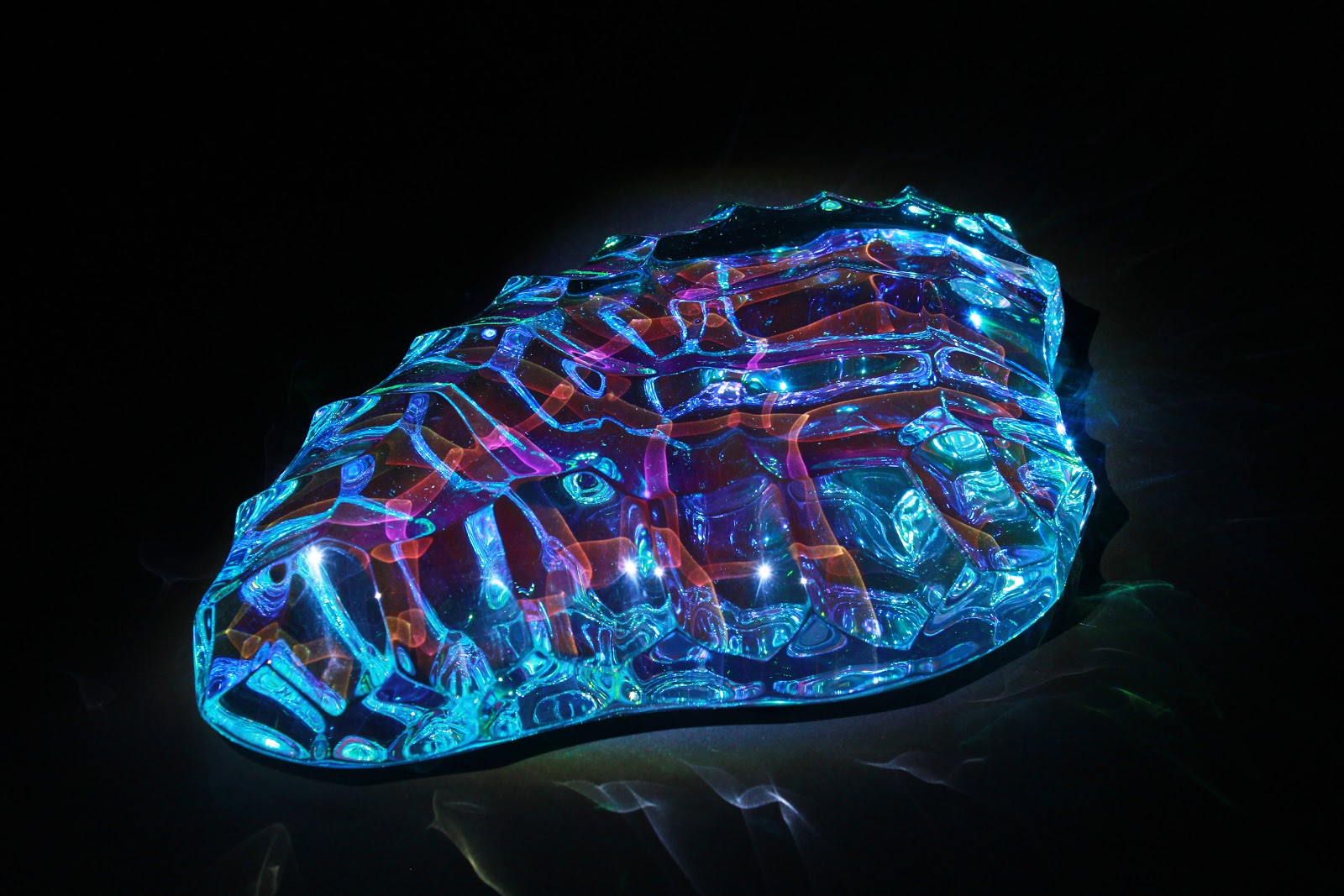 The film itself has no color, but a thin layer of metal powder made by vapor deposition reflects light of various colors such as blue and red. My work is completely transparent when viewed in moonlight. In sunlight, you can see a spectrum of colors. In yellow light, you can see warm colors, but in fluorescent light, the wavelengths are not enough to show the colors of my work. It’s best in sunlight, but for indoor lighting, LED is the best way to see the colors.

In a place with many light sources, the light is not very effective and the colors are diffused. It is best viewed against a dark background with a spotlight. 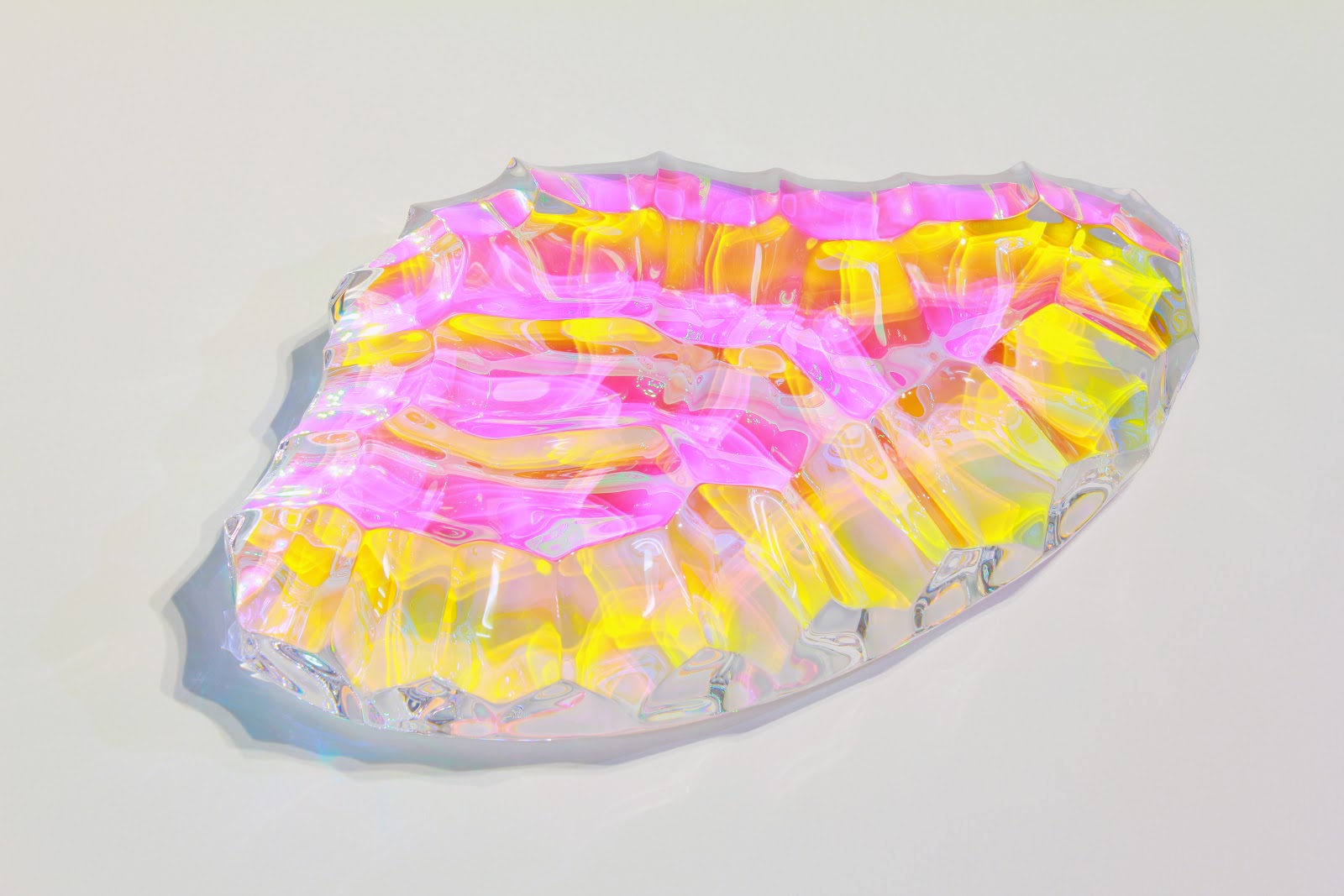 A single piece of film produces two different colors as light is reflected or passes through the film. The color of light passing through the film will be distinct and bright on many types of surface shapes, except when the surface is calm or flat. For this reason, I try to add a lot of edges and undulations to make the colors more distinct.

How do you form the acrylic resin base?

I use a hand grinder to roughly cut out the shape. Even the slightest undulation can change the color, so the final polishing is done by hand using sandpaper with a grit size of 100 to 2000 and polishing compound.

It is interesting to see how the combination of film and acrylic resin shapes can express infinite ideas.

How does your work change color depending on the angle of view?

The color changes completely as if it were a work of light art. However, since I take a scientific approach to the study of light, I believe that what I am pursuing is similar to what the Impressionist masters were pursuing.

The photo above is a good example of this. The same prismatic columns are placed side by side, but you can see completely different colors depending on the angle.

Does this acrylic material deteriorate over time?

I use the same acrylic resin that is commonly used in building materials, so there should be no problem unless it is left in a very harsh environment.

A bold step into the future

“… I’d like to hold an exhibition in outer space.”

What do you focus on now when creating your works, and what would you like to try in the future?

Currently, I am researching how colors change with the swell of the acrylic base. At first I was using glass spheres, but since glass spheres have a constant refraction, I am sculpting acrylic resin to make it more interesting. For me, an exhibition is like a collection of the results of an experiment. I am also experimenting to see what happens when I put multiple works together.

I am especially interested in space exhibitions. No other artist has ever exhibited their work in space, so I’d love to try it.

Where to buy Go Ogawa’s art

At TRiCERA, we have Go Ogawa’s works We also have many Other Artists at C-DEPOT We also introduce

A look at the repressed and fading self. Interview with Takumi Saito

Takumi Saito draws everyday scenes, such as playground equipment in the park, a corner of a room, or the side of the road, with...
Read more
Interviews

Born in Tokyo in 1997, Samihoshi is a painter who graduated from Musashino Art University in 2020 with a major in oil painting. Since...
Read more
News

Hiroki Takeda: Inhabiting the World of Animals in Vivid Watercolors

Pursuing the meaning of art for an uncertain age. Interview with artist Kosuke Motohashi

What is art in the age of traveling to the stars?

Decomposition and Reintegration of Landscape – Interview with Kosuke Kato

Click here for more information about the artist. Kosuke Kato says, "I decompose the visual information of the landscape and transform it into...

The ephemeral art of dancing in the forest

Art at Home – An Easy Guide to Stylish Decorations

Art Brings Space to Life Remember that exhilarating feeling you get when you leave the movie theater and come back to reality, or...

When you think of American art or artists, what or who comes to mind? August is American Artist Appreciation Month, a great time...

It is not uncommon for people to have similar professions to their relatives. This is especially true for musicians and athletes, for whom there...

Charity auction of art in China. What can art do with the Corona disaster?

Nudes in the Present: Contemporary Painting in the Face of Nudity

The nude is an expression of the human form as it really is. Not only have nude works been produced since the days of...

The ephemeral art of dancing in the forest

An exhibition showing current trends in contemporary art in Japan.     From June 5 to 20, the 13th edition of Art Award Tokyo Marunouchi 2019, one...

NO BORDER – or about the power to cross

A Tale of Poison and Purification

Charity auction of art in China. What can art do with the Corona disaster?

Can contemporary art be a playground?

Front and back of the portrait

A life where art is in harmony with everyday life.

NO BORDER – or about the power to cross

From Tomio Koyama Gallery to MAHO KUBOTA: Exhibitions to Visit in July

Put the art next to the pillow.

Decomposition and Reintegration of Landscape – Interview with Kosuke Kato

Have you ever wanted to live in a gingerbread house?

To be updated with all the latest news, offers and special announcements.

We at ART CLIP cover the latest art news from around the world and provide artists and We will continue to disseminate information that is more beneficial to the activities of the collector population.

This is a sample.